Torn by conflict and suffering from severe droughts and flooding, South Sudan is stepping up its climate ambition.

South Sudanese officials hope the world’s newest country can become carbon neutral by 2030, with a rollout of renewable energy and mass tree planting. But aid cuts, a slump in oil revenue and the legacy of civil war pose major hurdles to decarbonisation.

A draft plan seen by Climate Home News, which government aims to submit to the UN in early summer, hinges on international support. Of the estimated $100 billion cost by 2030, 90% would need to come from external sources.

“We are trying to be carbon neutral by 2030. If we have the funds, we will be able to make it happen. If the funds are not there, we will be looking at 2050,” South Sudan’s lead climate negotiator Joseph Bartel told Climate Home News from sweltering Juba, where temperature had risen above 40C.

“This country is really suffering from the impacts of climate change and we need to make sure that we are making our contribution to save our planet from this existential threat,” he said.

The draft plan shows quantifiable emissions reductions goals in seven sectors, including agriculture, transport, waste, energy and forestry, as well as emissions intensity targets for the oil industry. There is no explicit analysis of whether these add up to net zero emissions.

It includes developing nearly 3,000MW of hydropower projects, installing wind turbines, rolling out decentralised solar power and promoting biogas. In forestry, the plan is to plant 100 million trees over ten years, and sequester 45 million tonnes of CO2 equivalent by 2030 by reducing deforestation.

To adapt to intensifying heat and rainfall extremes, there are proposals to develop drought- and flood-resilient seeds, promote wetland management and diversify livelihoods away from subsistence farming.

The UK host to the critical Cop26 climate talks scheduled to take place in Glasgow, in November, is slashing overseas development assistance from 0.7% to 0.5% of its national income.

Leaked documents from the UK’s foreign and development office obtained by openDemocracy show cuts are being planned across some of Africa’s most fragile states and climate vulnerable nations.

Among the UK’s ongoing projects in the country is a seven-year programme to provide humanitarian assistance and build resilience to shocks from conflicts, droughts and flooding.

Bartel described the reported decision as “depressing” and “unwise”. “The humanitarian situation is dire,” he said, warning the UK was sending “the wrong signal” ahead of the climate summit and he hoped the government would reconsider.

“This trend of cutting aid and not getting to the $100bn [by 2020 pledged by rich governments in 2009] show we are on a very slippery slope. If we are not careful, we will fail to tackle climate change in countries like ours,” Bartel said.

With oil exports providing up to 80% of government revenues, the collapse in oil price induced by the pandemic sent the economy into “tailspin” said Bartel. Many civil servants in the country haven’t been paid for months.

Following South Sudan’s independence in 2011, the nation of 11 million people entered a six- year civil war that killed an estimated 400,000 people and displaced millions. It came to an official end when a peace agreement was signed in February 2020.

The nation is struggling to rebuild fragile political institutions. While a transitional coalition government was formed last year, parliament hasn’t been re-constituted since the peace deal was signed.

In a symptom of the instability, the country’s parliament ratified the Paris Agreement in 2017 but nobody sent the paperwork to the UN until last month.

South Sudan is among the most rapidly warming countries in the world, as average temperatures increased by 1-1.5C across large parts of the country in the last 60 years. It contributed 0.07% of global emissions in 2015.

Severe droughts followed by unpredictable and intense rainfall periodically destroy crops, in a country where the majority of the population is dependent on subsistence farming.

According to the World Food Programme, 60% of the population, or about seven million people are struggling to find enough food each day.

Repeated flooding has heightened conflict in some parts of the country, where farmers and pastoralists are competing for shrinking land for grazing, he said. 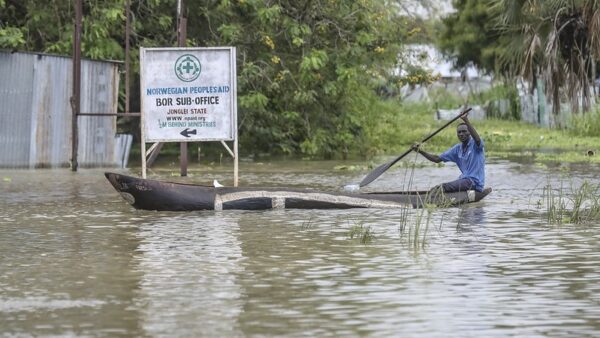 “The priority should be adaptation, adaptation and adaptation,” Nhial Tiitmamer, of the Sudd Institut in Juba, told Climate Home. “The international community should pay more attention to the climate crisis in South Sudan.”

The government has identified 28 adaptation projects that would strengthen communities’ resilience but only three have secured funding from the Green Climate Fund and the Least Developed Countries Fund.

“We cannot increase ambition when the funding is being reduced,” said John. “How will the UK Cop26 presidency mobilise funding when it is cutting its own?”

A spokesperson for the UK government said: “The seismic impact of the pandemic on the UK economy has forced us to take tough but necessary decisions, including temporarily reducing the overall amount we spend on aid. We are still working through what this means for individual programmes and decisions have not yet been made.”

EARTH DAY 2022-INVEST IN OUR PLANET

The launch of the Global Assessment Report on DRR